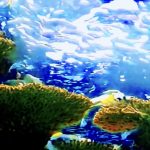 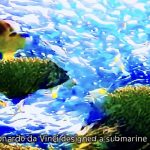 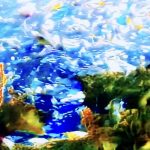 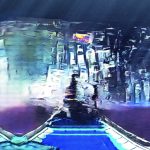 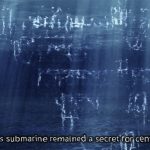 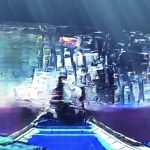 Titled Leonardo’s Submarine, the three-channel video draws a parallel between Leonardo da Vinci’s primitive submarine—first sketched in the early 16th century—and Leonardo-Finmeccanica, an Italian global high-tech company and one of the key players in aerospace, defense and security—partially owned by the Italian government through the Ministry of Economy and Finance.

In 1515, Leonardo designed a weapon that would allow Venice to defend itself from the attacks of the Ottoman Empire: a proto-submarine that could sink enemy ships inadvertently. Despite the fact that the Doge of the Republic would have rewarded him generously, Leonardo decided to bury his invention under obscure descriptions and cyphered diagrams. In Venice, one would be noble if rich, and that tenet would subjugate ethics. Leonardo eventually concluded that people were too evil to handle such a destructive technology. Steyerl embarks the viewer on a metaphorical journey aboard Leonardo’s vessel. Venice’s laguna, palazzi and skies, generated by Artificial Intelligence video processing, flow dreamlike and foreign, while a voice-over speaks of technology, power, corruption, art and warfare, topics that the artist has explored thoroughly over the last years.

A Way in Untilled

He Didn’t Even Know He Was Watching the Sunset

Reflection from the Mountain